Berlin, Germany – Anwar Raslan, a former Syrian colonel, has been in a German jail ever since he was arrested in Berlin in mid-February last year.

He is accused of committing crimes against humanity and on Thursday is going on trial at the Higher Regional Court in the southwestern German city of Koblenz, despite the coronavirus pandemic.

The process is expected to take up to two years.

Eyad al-Gharib, who supposedly worked under the colonel, will also be on trial.

But it is Raslan’s case that is considered most significant – the senior military official is seen as a representative of the government of Syrian leader, Bashar al-Assad, and German prosecutors will try to prove his involvement in what has often been described as state-sanctioned, systematic torture and murder.

“Germany, with this case, offers the hope that, while there is seemingly large-scale impunity for crimes in Syria, that impunity will only be temporary,” Catherine Marchi-Uhel, head of the International, Impartial and Independent Mechanism for Syria, or IIIM, told Al Jazeera.

IIIM was created by the UN to collect and preserve evidence of crimes for later use in court.

The Raslan trial is also important as a new test of the evolving legal principle known as universal jurisdiction.

Using this principle, Germany is prosecuting a case similar to those that might previously have ended up at the International Criminal Court in The Hague.

In a statement published on the Koblenz court’s website, German prosecutors describe what they believe happened at the place Raslan worked, Branch 251 of the Syrian military intelligence service, in Damascus: Between April 2011 and September 2012, at least 4,000 prisoners were tortured there, including with beatings, electrocution and sexual assault. Detainees were denied medical treatment and often food. Cells were so over-crowded that sometimes it was impossible to sit or lie down. At least 58 people died as a result of that treatment at Branch 251 during that time.

“As head of the investigations unit, the accused … supervised and determined the use of systematic and brutal torture,” the prosecutors wrote. “During the period in which these crimes were committed, he knew about the extent of the torture … and that prisoners died, thanks to the extreme violence.”

Raslan ended up in Germany after defecting from the Syrian military in 2012.

Justice was the main claim we asked for in our revolution. Although this is a very tiny step on the road toward justice, it gives us back some hope that we are going in the right direction.

Since 2014, he and members of his family had been living in Berlin as refugees.

In fact, other Syrians living in the German capital knew that the former military intelligence man was among them. Before defecting, Raslan apparently even helped some opposition activists, something that may come up during his defence.

It was not until later, as Syrian exiles in Europe began to organise, that pressure to arrest Raslan increased.

Who will provide evidence?

Evidence against Raslan will come from the work of various Syrian exile groups in Europe, including the Syrian Center for Legal Research and Studies in Berlin, their local partners, the European Center for Constitutional and Human Rights, or ECCHR, and the Commission for International Justice and Accountability, an NGO that has collected 800,000 pieces of documentary evidence from the Syrian conflict.

It is thought that elements of the Caesar Files – over 53,000 photographs of 6,000 corpses of tortured detainees in Syrian regime jails, taken by a police photographer, known only as Caesar, between 2011 and 2013 – are also likely to be used as evidence against him.

At least 11 of the dead prisoners in the gruesome pictures came from Branch 251 during that period.

Up until now, witnesses in the case, aged from their late 20s to mid-60s and arrested for taking part in anti-government demonstrations early on in the Syrian revolution, have mostly remained anonymous.

One witness contacted by Al Jazeera said they had been advised not to talk to media until after giving their testimony.

We are dealing with an apparatus of the Syrian state, and that apparatus has produced a lot of dead people.

Wolfgang Kaleck, German lawyer and founder of the ECCHR, which will represent 16 witnesses during the trial, believes that the allegations against the former colonel will be proven.

“Of course, it’s too early to say for sure if he will go to jail,” Kaleck told Al Jazeera. “But there are a lot of factors that suggest he will.

“This case differs from a normal murder trial.

“We are dealing with an apparatus of the [Syrian] state, and that apparatus has produced a lot of dead people. It was systematic, like a machine. So we know where he [Raslan] worked, and we know the place he worked massively tortured and murdered people. If we can place him there at that time, then that’s already quite a lot of evidence against him. Of course, we don’t know how he will defend himself. But if he is convicted, he would be looking at a lengthy sentence.”

Steve Kostas, lead project officer with the Open Society Justice Initiative’s Syrian accountability project, said: “This case is important because we are seeing evidence, compiled by so many Syrian groups, tested in a court of law.”

His NGO has hired a German lawyer who will represent a further six victims in Koblenz.

“It shows them there is a path to justice, thanks to their diligent efforts, and I hope it gives them the confidence to bring more cases.” 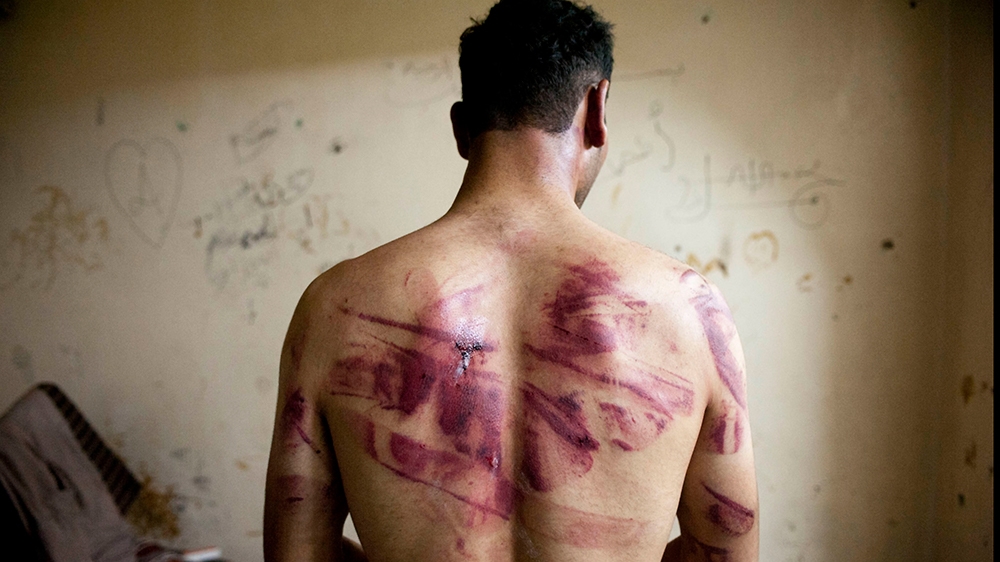 A Syrian man shows marks of torture on his back after he was released by regime forces, in the Bustan Pasha neighbourhood of Syria’s northern city of Aleppo on August 23, 2012 [James Lawler Duggan/AFP]

Hadi al-Khatib is the founder and director of the Berlin-based Syria Archive. Since 2011, his project has archived more than 3.7 million digital records that show how civilian infrastructure, including hospitals, was deliberately targeted and how civilians were arrested and tortured.

“It is high time for lawyers and prosecutors to use this documentation to investigate these crimes and issue arrest warrants,” al-Khatib told Al Jazeera.

Then there is the other reason the Raslan trial is so noteworthy: its use of the principle of universal jurisdiction.

The German Code of Crimes against International Law, or CCIL, allows federal prosecutors to pursue anyone who commits crimes against humanity, anywhere, whether they are German or not.

The CCIL has been around since June 2002 but, until very recently, it had not been used much, or with particular success.

That has changed, thanks to a sort of perfect storm of previously unconnected elements: the arrival of around a million Syrian refugees after 2015, who brought evidence war crimes with them; the political will inside the German government and the German federal prosecutor’s office to pursue this kind of case; and the increasing use of what are known as “Strukturverfahren”, or “background investigations” by the country’s war crimes unit. 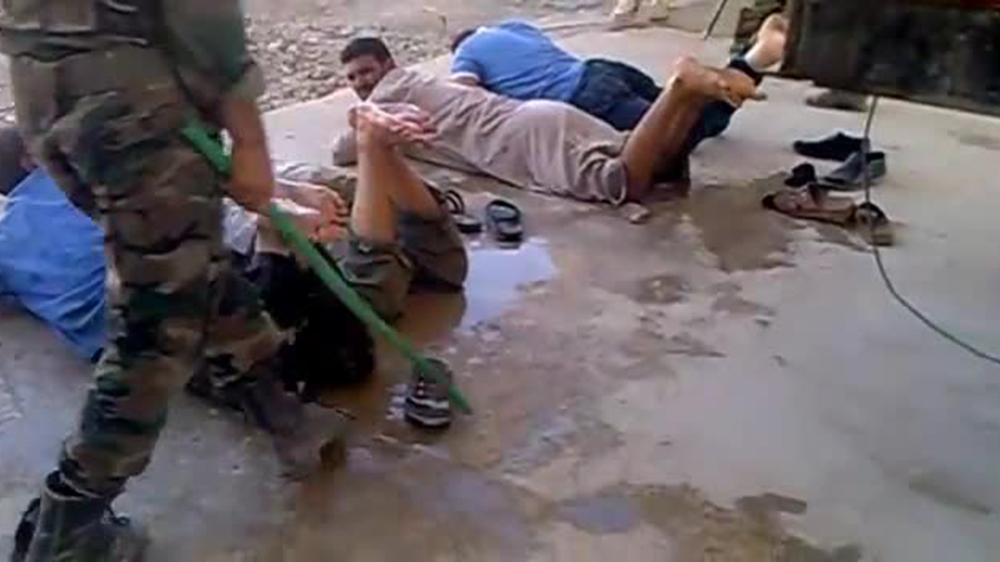 A still from a video uploaded on YouTube on September 21, 2012, allegedly shows Syrian government forces torturing Syrian civilians at a checkpoint between the cities of Hama and Salamiyah [AFP]

Suspecting crimes against humanity, German investigators have been looking into the Syrian conflict since 2011.

As Florian Jessberger, a law professor at Humboldt University in Berlin, explained, these background investigations involve forward planning and international cooperation – Germany and France worked together on this case, for example – and, thanks to universal jurisdiction, they could eventually be used to prosecute war crimes in a third country, setting up the potential for a new form of international justice.

That amounts to “a creative moment in law that is, in some ways, like the Nuremberg Trials,” Jessberger told Al Jazeera.

It is possible that, in the future, universal jurisdiction could even eventually be used to trial cases inside Syria, Kaleck noted.

“We understand this Koblenz trial as a beginning,” he said, adding that the knowledge gained and evidence examined during the Raslan trial could eventually be used in other cases in Europe and further afield.

“This is a landmark trial which sends a strong message to Syrian victims and survivors that not only is there a willingness to prosecute crimes through the principle of universal jurisdiction,” the IIIM’s Marchi-Uhel, a former judge, added, “but that it is possible to bring suspected perpetrators to court for crimes committed outside a state’s borders.” 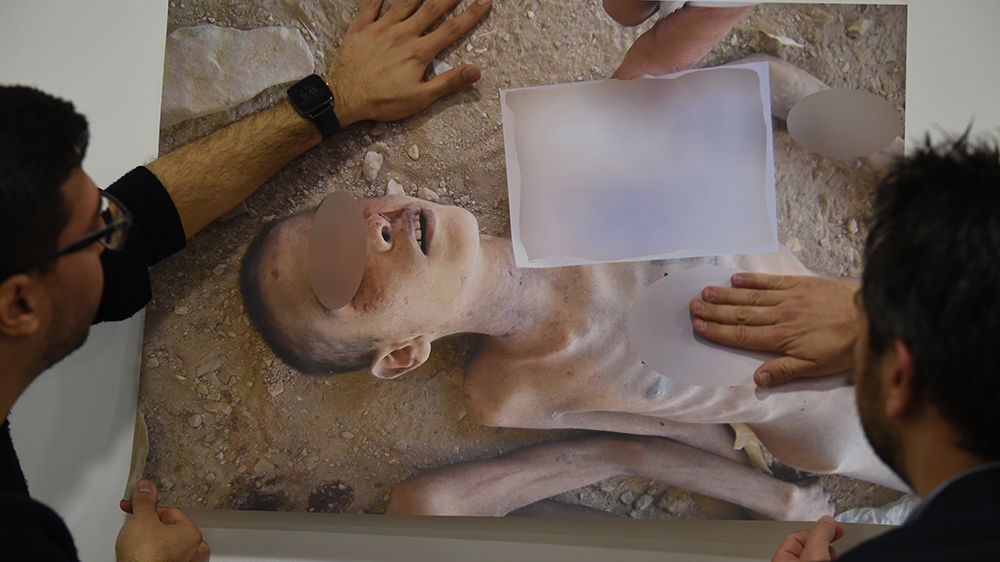 Members of the Syrian Organisation for the Victims of War display pictures documenting the torture of detainees inside the Assad regime’s prisons and detention centres, on March 17, 2016, in Geneva, Switzerland. The photographs were taken by a former military policeman of the Syrian army, known as ‘Caesar’, who defected and fled Syria in 2013 [Philippe Desmazes/AFP]

Of course, for Syrians in Germany, this is also incredibly personal.

“Justice was the main claim we asked for in our revolution,” Abeer Farhoud, a Syrian activist and torture survivor now living in Germany, said during an online press briefing hosted by the ECCHR earlier this week, before the trial began.

“Although this is a very teeny-tiny step on the road [toward] justice, it gives us back some hope that we are going in the right direction,” Farhoud concluded.

“And that we didn’t lose our revolution – not entirely – and that we can give the people that have been killed … the peace and justice that they deserve.”

In America, there are two main types of pharmacy; compounding pharmacy and regular pharmacy. There are some very important differences

Dust – The Enemy of All Electronics