BALLARD ADDS DEMOCRATS: Brian Ballard, a top Trump fundraiser whose lobbying practice Ballard Partners boomed under President Donald Trump, announced today the firm is bringing in some Democratic lobbying firepower weeks before the inauguration of President-elect Joe Biden. Ballard has tapped Courtney Whitney, a top Democratic fundraiser who was a consultant for the pro-Biden super PAC Priorities USA, as a partner. Whitney also played a role in the election of new Miami-Dade Mayor Daniella Levine Cava, where Ballard has an office.

— Two other Ballard Partners employees, Ana Cruz and Stephanie Grutman, will be joining the firm’s D.C. office as well. Cruz is a longtime Democratic consultant whose partner is Tampa Mayor Jane Castor while Grutman is a former Democratic congressional staffer and managing partner of Ballard Partners’ Fort Lauderdale office.

— While Ballard quickly rose to become one of the top lobbyists in Trump’s Washington thanks to his ties to the president, he insisted last year his firm, which includes Democrats like former Florida Rep. Robert Wexler and Jamie Rubin, who worked with Biden in the Senate, would be well-positioned even if Trump lost his reelection bid.

— He reiterated that in an interview with PI, saying that the firm was already planning to make more hires with congressional ties and was planning more Democratic hires no matter who won the White House in November. He also teased more personnel moves while praising Whitney as a rising star whose hire “made a lot of sense for us in a lot of different ways.”

ANOTHER CBC CHIEF HEADS DOWNTOWN: Keenan Reed has left the Hill to join the Alpine Group as a vice president. Reed was previously chief of staff for Rep. Donald McEachin (D-Va.), the whip for the powerful Congressional Black Caucus and a member of the Energy and Commerce Committee. She’ll register to lobby and plans to work with the firm’s energy, health and technology clients. Reed is the fifth former chief to a member of the CBC to depart the Hill for K Street since November’s election, joking in an interview that they “all made the leap” downtown together.

— She thanked the caucus for giving her her start in Washington, crediting the group’s growing influence on the Hill and its “unwavering stance on diversity in all areas of government” in part for growing the demand for more diverse perspectives on K Street that opened up “opportunities like mine with Alpine.”

Good afternoon, and welcome to PI, where your host, who has been hunkering down in Georgia over the past few months, is thrilled at the prospect of not being inundated by runoff ads after today. How are you preparing for the results — either way? Let me know: [email protected]. And follow me on Twitter: @caitlinoprysko.

A message from the Edison Electric Institute:

Our Clean Energy Leadership. America’s investor-owned electric companies are leading the clean energy transformation. We are united in our commitment to get the energy we provide as clean as we can as fast as we can, without compromising on the reliability and affordability that are essential to the customers and communities we serve. We are making progress. Carbon emissions from the electric power sector are at their lowest level since 1987—and continue to fall.

PREPARING FOR PPP: Ahead of an expected release of guidance for the latest draw of loans from the Paycheck Protection Program, which saw its coffers refilled as part of last month’s stimulus package, American Society of Association Executives — essentially a trade group for trade groups — is asking for clarity on the legislation’s provisions making chambers of commerce and business trade associations known as 501(c)(6)s newly eligible for the loans.

— While the inclusion of trade groups was cheered, ASAE President and CEO Susan Robertson wrote to Treasury Secretary Steven Mnuchin and Small Business Administrator Jovita Carranza last month asking for their agencies to clarify how caps on yearly lobbying receipts and activities will be calculated when determining eligibility for the loans. The bill gives SBA 10 days from enactment to issue new guidance for the latest round of PPP loans, which spokeswoman Carol Wilkerson said would be posted online tomorrow.

COHN LANDS AT IBM: Former National Economic Council Director Gary Cohn has been named the vice chairman of the tech giant IBM, the company announced today. Cohn, who was president and COO at Goldman Sachs before joining Trump’s White House, will work on “business development, client services, public advocacy and client relationship management,” the company said in a press release.

— Cohn played a key role in the GOP’s 2017 tax overhaul, but left the White House in 2018 after Trump’s decision to implement steel and aluminum tariffs pushed by protectionist advisers, a move Cohn opposed. In this morning’s announcement, IBM CEO Arvind Krishna touted Cohn’s “business transformation” chops as an asset for the company as it works to build out its cloud and AI services. The former NEC director said that he’ll remain on as co-chairman of Cohn Robbins Holding Corp., his special-purpose acquisition company.

AIRLINES BACK TESTING REQUIREMENTS: The airline industry has endorsed a CDC proposal that would require international passengers to be tested for coronavirus before traveling to the U.S., POLITICO’s Sam Mintz reports. Airlines for America, which represents the major U.S. carriers, wrote to Vice President Mike Pence on Monday to express support for a plan to implement a “global program to require testing,” while calling for the administration to roll back blanket travel restrictions on travelers from Europe, the UK and Brazil that have been in place for much of the pandemic.

— Last week the government “put into effect a negative test requirement for passengers entering from the U.K., in response to the discovery of a new, highly contagious strain of Covid-19, but the new requirements under consideration would represent a major expansion.” A4A asked for 14 days to implement any new requirements, and also that rapid testing be made available for the push.

EYES ON THE GAVEL: Nancy Pelosi has barely been reelected House speaker for 48 hours and already the jockeying to succeed her should she step down in 2022 has begun, POLITICO’s Heather Caygle and Sarah Ferris report. “Democrats are already closely watching the small cadre of their colleagues whose names have been floated for the top jobs, including Democratic Caucus Chair Hakeem Jeffries, former Black Caucus Chair Karen Bass, and House Intelligence Chair Adam Schiff for speaker. Assistant Speaker Katherine Clark, Vice Chair Pete Aguilar and Progressive Caucus Chair Pramila Jayapal are all also mentioned for high ranking positions. None has publicly confirmed any potential ambitions — to do so would be considered taboo within the caucus. But all have advantages that could help them advance if there’s a leadership vacuum at the top.” 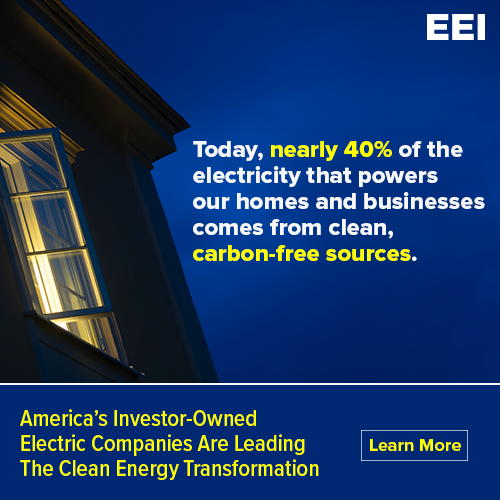 — Kevin Benacci has joined Targeted Victory‘s corporate practice as a vice president. He most recently served as the chief external affairs officer at the Cybersecurity and Infrastructure Security Agency.

— Stefan Baily has been promoted to chief operating officer at Prime Policy Group. He was previously a managing director there.

— SKDKnickerbocker has hired Erin Weinstein as senior vice president for health care. She was most recently vice president of marketing and communications for the Greater Washington Partnership.

— Ian Mair is now a vice president at The Smith-Free Group. He was previously director of research and analysis.

— The Carbon Capture Coalition has hired Madelyn Morrison as its external affairs manager. She was most recently a federal affairs specialist at the Alzheimer’s Association.

— Jena Lococo is now a policy analyst at ClearPath. She was previously an environmental and regulatory planner at ExxonMobil.

A message from the Edison Electric Institute:

Our Clean Energy Vision. Today, nearly 40% of the electricity that powers our homes and businesses comes from clean, carbon-free sources, including nuclear energy, hydropower, wind, and solar energy. Carbon emissions from the U.S. power sector are at their lowest level in more than 30 years. And, collectively, EEI’s member companies already are on a path to reduce their carbon emissions at least 80% by 2050, compared with 2005 levels. By further reducing carbon emissions in our sector, we can achieve our clean energy goals and help other sectors—particularly the transportation and industrial sectors—transition to clean, efficient electric energy. This is just the start. With new technologies and the right policies, a 100% clean energy future is possible. For us, the path forward is clear. The path forward is clean. We are #Committed2Clean.

once again, free stuff, free software, free tunes, enjoy it, hope you like it, thanks. View at DailyMotion

10 Tips on Shopping for CCTV Cameras

In a Slight to E.U., U.K. Says Not All Ambassadors Are Equal