Marco Midence, the finance minister of Honduras, has revealed on social media that he tested positive for coronavirus.

The Harvard-educated lawyer was appointed finance minister on August 20.

He wrote in Spanish that he will work from home and remain in isolation while recovering from the “mild” symptoms of the disease. 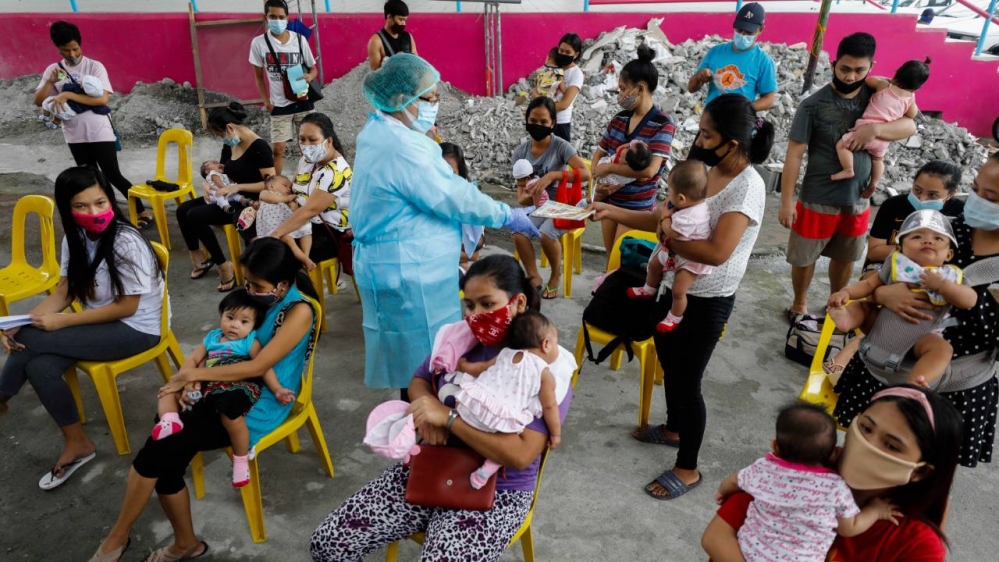 The Philippines has recorded over 237,000 coronavirus cases – the highest in the Asia-Pacific region [Rolex dela Pena/EPA]

Researchers from the University of the Philippines said that the spread of COVID-19 in the country is slowing down, citing the rate of reproduction in major cities.

Dr Guido David said in an interview that an interdisciplinary group of researchers found that the rate of the spread went down from 0.99 percent to .94 percent in the most recent week.

The average daily number of cases in mid to late August also went down from 4,000 to 3,000. A lockdown was reimposed by the government during that period.

The Philippines recorded over 237,000 cases – the highest in the Asia-Pacific region. It also recorded over 3,800 deaths and over 184,000 recoveries, according to Johns Hopkins University.

The National Health Commission in China has reported an additional 12 new coronavirus cases in the country, all of which are imported.

While the commission said that it has not recorded new positive cases locally, 17 people were declared as “asymptomatic” – which China does not count as confirmed cases.

As of Monday, cumulative number of infections in China stand at 85,134. There were no new deaths reported, keeping the death toll at 4,634, according to the government.

The government has said the real number of infections could be significantly higher, and the health ministry said on Saturday that it has recorded over 122,000 in excess deaths during the pandemic.

Chinese drug firm Sinovac has said that thousands of employees and their families have been given its Covid-19 vaccine.

Company spokesman Liu Peicheng was quoted by the South China Morning Post as saying that around 3,000 employees and their families have been offered the vaccine on a voluntary basis.

Zhang Yinan, a senior manager at China National Biotec Group (CNBG), which is developing its own vaccine, also said that she had been given her company’s vaccine.

“After animal testing, I’m willing to try the company’s product to see if it’s safe and effective, and there are 150 employees like me who have been inoculated,” told SCMP. The CNBG vaccine is being tested among 35,000 residents in the United Arab Emirates. 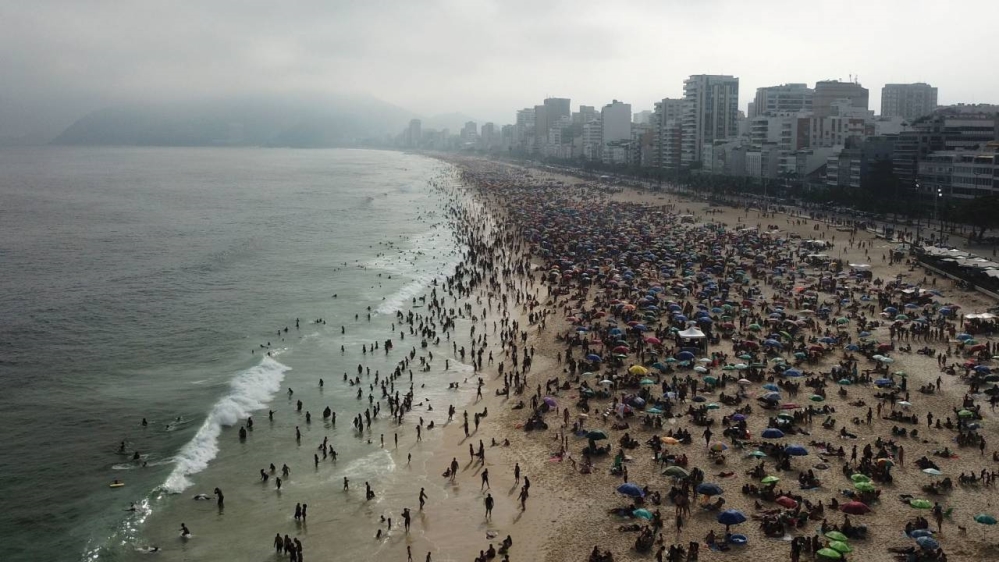 Brazil’s Health Ministry has reported at least 14,521 additional coronavirus infections and 447 deaths, raising the total number of cases to at least 4.14 million and death toll to over 126,600.

In terms of the number of cases, however, Latin America’s most populous country could soon be overtaken by India, which reported 4.11 million infections as of Sunday.

00:35 GMT – Over a million Hong Kong residents sign up for COVID-19 testing

The Hong Kong government said that as of Sunday night, at least 675,000 samples have been collected since the testing was launched on September 1 [Anthony Kwan /Pool via EPA]

An estimated 1.13 million residents of Hong Kong have signed up for free coronavirus testing in the semi-autonomous Chinese city.

The number represents about 15 percent of the city’s 7.5 million residents.

In a statement, the Hong Kong government also said that as of Sunday night, at least 675,000 samples have been collected since the testing was launched on September 1.

An additional 180,000 people signed up on Sunday for the week-long programme, the statement said, urging more residents to participate in the free service extended by the government.

More than 4,800 people have tested positive of COVID-19 in Hong Kong, and at least 94 have died. More than 4,500 patients have already recovered.

Pro-democracy activists have called for boycott of the programme citing privacy concerns after medical staff from mainland China helped in carrying out the testing.

Victoria state in Australia has reported 41 new cases and nine new deaths from the coronavirus.

The number of cases in Victoria is slightly lower than the previous day’s 63 infections, but the fatalities increased almost twice from Sunday’s five cases.

On Sunday, the state premier ordered an extension of a “hard lockdown” in Melbourne, Victoria’s capital and Australia’s second-largest city, until September 28 to help contain the spread of the disease.

Australia’s second-most-populous state accounts for most of the cases and deaths in the country. 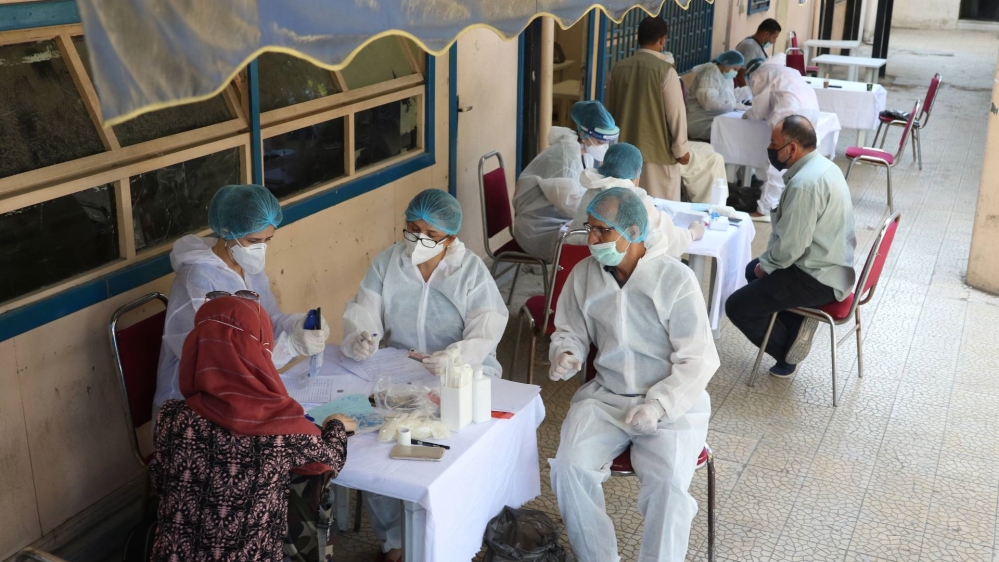 According to Johns Hopkins University, Syria has over 3,100 coronavirus cases and 134 deaths as of Sunday [Youssef Badawi/EPA]

A United Nations official has said that more than 200 of its staff in Syria have contracted coronavirus.

In a letter leaked to Reuters news agency, Imran Riza, UN Resident Coordinator and Humanitarian Coordinator in Syria, informed UN heads of agencies that the international organisation is trying to secure a medical facility to treat the patients.

“More than 200 cases have been reported among UN staff members, some of whom have been hospitalised and three who were medically evacuated,” Riza was quoted as saying.

The news comes as Syria is reportedly experiencing a tenfold increase in cases in the country in the last two months.

According to Johns Hopkins University, Syria has over 3,100 cases and 134 deaths.

COVID-19 cases in at least 22 states in the United States are rising, according to a Reuters analysis.

The US is celebrating the Labor Day holiday, a long weekend where families and friends get together to mark the end of summer.

As recently as three weeks ago, cases were increasing in only three states, Hawaii, Illinois and South Dakota, according to the Reuters analysis, comparing cases for the two-week period of August 8-22 with the past two weeks.

Most of the 22 states where cases are now rising are in the less-populated parts of the Midwest and South.

Many state officials have issued precautionary measures for residents to follow to help contain the spread of the disease.

But tens of thousands of people across the US, including the state of California, were seen congregating in crowded beach areas without observing proper social distancing rules and without using protective masks.

Read all the developments from yesterday (September 6) here.

Here’s what you need to know: Near Windsor Castle on Saturday.Credit…Andrew Testa for The New York Times Prince Philip, the

Let’s Celebrate The Moment You Get Vaccinated