Soldiers have taken up arms near Mali’s capital and staged an apparent mutiny amid an ongoing political crisis in the country.

The soldiers on Tuesday fired their guns into the air in the base in Kati, a garrison town some 15km (nine miles) from Bamako, while witnesses said armoured tanks and military vehicles could be seen on its streets, according to media reports.

Some senior government ministers and army officers were also reportedly under arrest but it was not clear by whom.

It was also not immediately clear who was behind the unrest or where embattled President Ibrahim Boubacar Keita – who has faced weeks of opposition protests calling for his departure – was when it erupted. Reports said he had been taken to a safe location.

In a statement, the West African bloc ECOWAS urged the soldiers “to return to their barracks without delay”.

“This mutiny comes at a time when, for several months now, ECOWAS has been taking initiatives and conducting mediation efforts with all the Malian parties,” the bloc said in a statement. 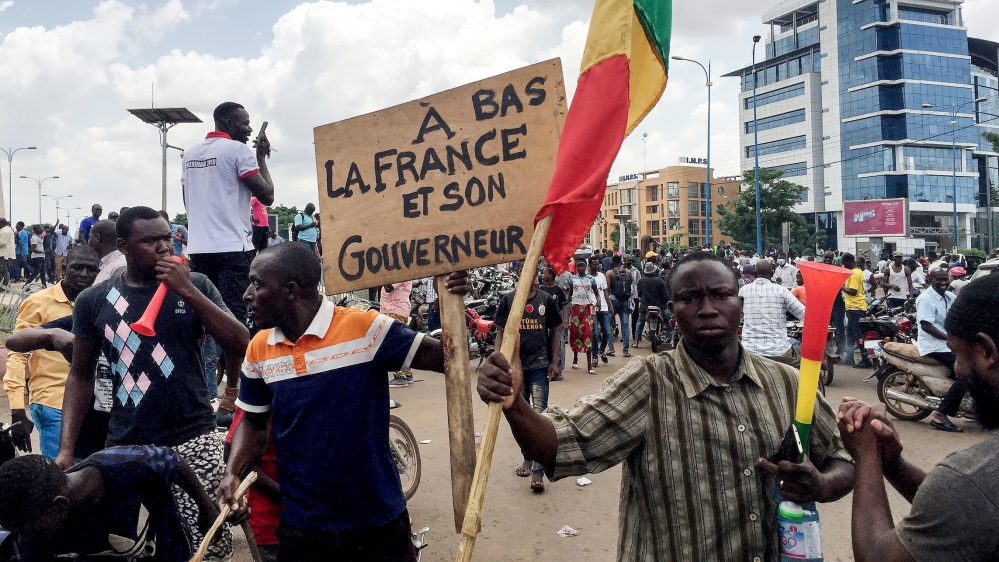 Opposition supporters react to the news of a possible mutiny of soldiers in the military base in Kati. The sign reads: ‘Down with France and its governor’ [Rey Byhre/Reuters]

Speaking from Bamako, journalist Mohamed Salah told Al Jazeera that the situation in Kati was “very confusing”, with reports of soldiers putting up barricades in the town and detaining officials.

In Bamako, meanwhile, opposition protesters gatherered at Independence Square calling for Keita’s departure and expressing support for the actions of the soldiers in Kati.

Earlier, the Norwegian Embassy in Mali said in an alert to its citizens: “The embassy has been notified of a mutiny in the Armed Forces and troops are on their way to Bamako. Norwegians should exercise caution and preferably stay at home until the situation is clear.”

Similarly, the French Embassy said: “Because of serious unrest this morning, August 18, in the city of Bamako, it is immediately recommended to remain at home.”

Mali has been mired in a deep political impasse for months as Keita came under fierce pressure from the opposition June 5 Movement to resign.

Keita’s opponents have led mass protests for more than two months, demanding his resignation amid growing dissatisfaction over Mali’s economic woes, perceived high-level corruption and the failure to contain a worsening security situation that has rendered vast swathes of the country ungovernable.

At least 14 protesters were killed during three days of clashes with security forces last month, according to the United Nations and human rights activists.

Regional powers are worried that any prolonged unrest from the protests could derail the battle against armed fighters in the wider Sahel region, many of whom are centred in Mali.

On March 21, 2012 a mutiny erupted at the Kati military camp as rank-and-file soldiers began rioting and then broke into the camp’s armoury. After grabbing weapons they headed for the seat of government, led by then Captain Amadou Haya Sanogo.

The turmoil contributed to the fall of northern Mali to fighters and Sanogo was later forced to hand over power to a civilian transitional government that then organised an election.

The 2013 vote was won by Keita, who got re-elected five years later.

Underscoring the fear of Mali falling into further disarray over the current political crisis, ECOWAS has stepped in to mediate and urged Keita to share power in a unity government.

The 75-year-old president has also proposed some concessions, but these moves have been roundly rejected by opposition leaders who remain steadfast in calling for Keita’s departure.

AT&T, loaded with debt from its DirecTV deal, sells part of its TV business to a private equity firm.