The demonstrators set up makeshift barricades and chanted slogans such as “Five demands, not one less” in reference to their demands from the government, including investigation of alleged police brutality against anti-government protesters last year.

Water cannon trucks and armoured police vehicles were seen rolling into Causeway Bay, while in Wan Chai police fired tear gas to disperse the crowds after protesters tried to block a road. Local media reported that more than 100 people were detained.

“This is the first large demonstration in Hong Kong since COVID-19 arrived here,” Al Jazeera’s Adrian Brown, reporting from a protest site, said. “The protesters are not just defying social-distancing rules, they’re also defying an order by Hong Kong’s police not to hold this unauthorised assembly – and, of course, they are once more defying Beijing.”

The planned legislation is expected to ban treason, subversion and sedition, and comes after Hong Kong was shaken in 2019 by months of massive, often-violent protests sparked by opposition to a now-shelved bill to extradite criminal suspects for trial in mainland China.

Beijing’s proposal on Thursday sent a chill through financial markets and drew a swift rebuke from foreign governments, international human rights groups and some business lobbies.

In drafting the tough new laws, which could also see the setting up of Chinese government intelligence agencies in the finance hub, Beijing would be circumventing Hong Kong’s lawmaking body, the Legislative Council.

Tear gas was fired around 1:25pm as protesters sought to march to Wan Chai. pic.twitter.com/ZPRKJ5N5WM

The move has sparked concerns over the fate of the “one country, two systems” formula that has governed Hong Kong since its return to Chinese rule in 1997 and which guarantees the city broad freedoms not seen on the mainland.

Some local commentators have described the proposal as “a nuclear option” that is part of Chinese President Xi Jinping’s high-stakes power play.

A backlash intensified on Saturday as nearly 200 political figures from around the world said in a statement the proposed laws were a “comprehensive assault on the city’s autonomy, rule of law and fundamental freedoms”.

“If the international community cannot trust Beijing to keep its word when it comes to Hong Kong, people will be reluctant to take its word on other matters,” they wrote.

The statement, which was also signed by Hong Kong’s last British governor, Chris Patten, said the proposed law is a “flagrant breach” of the Sino-British Joint Declaration that returned Hong Kong to China in 1997. 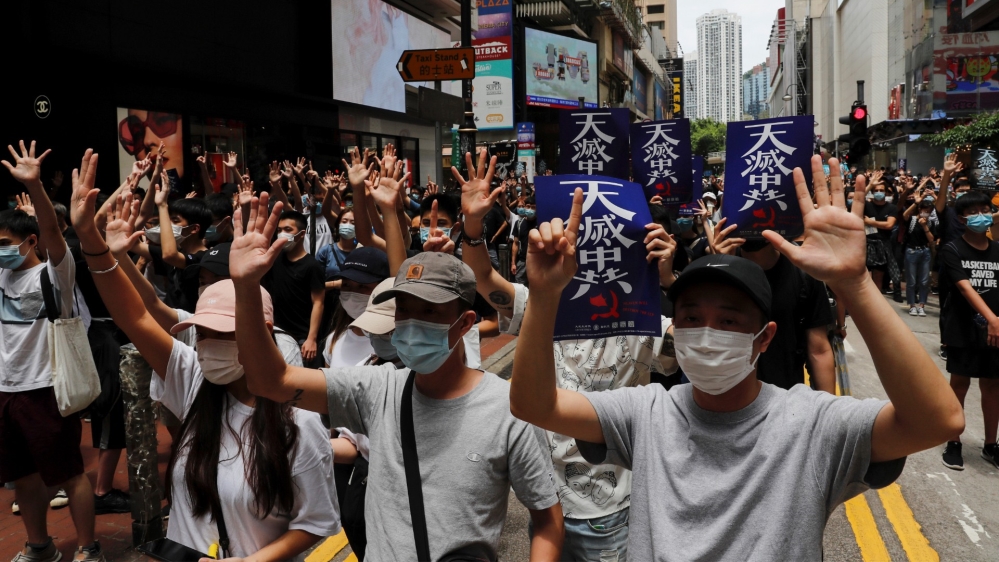 The proposed national security law has sparked concerns over the fate of the ‘one country, two systems’ formula that has governed Hong Kong since its return to Chinese rule in 1997 [Tyrone Siu/Reuters]

China has dismissed other countries’ complaints as “meddling” and rejected concerns the proposed laws would harm foreign investors.

Briefing reporters on Sunday, the Chinese government’s top diplomat Wang Yi said the new legislation would target a narrow category of acts and would have no impact on the city’s freedoms or rights, or interests of foreign firms.

State Councillor Wang said people should be more confident of the stability of Hong Kong, instead of being more worried.

Sunday’s rally was initially organised against a controversial national anthem bill, which is due for a second reading at the Legislative Council on Wednesday, but the proposed national security laws sparked calls for more people to take to the streets.

Hong Kong has increasingly become a pawn in deteriorating relations between Washington and Beijing, and observers will be watching for any signs of acceptance among the broader local community or indications that activists are gearing up for a fresh challenge.

Anti-government protests that escalated in June last year plunged the city into its biggest political crisis in decades, battered the economy and posed the gravest popular challenge to Xi since he came to power in 2012.

The sometimes violent clashes that roiled the city saw a relative lull in recent months as the government imposed measures to curb the spread of coronavirus.

In an op-ed published on Sunday by the Nikkei Asian Review, former Hong Kong legislator, Nathan Law, who is also the founding chairperson of pro-democracy group Demosisto, wrote that if the new law is imposed on Hong Kong, residents “truly fear for our safety.”

“Our freedom of speech, assembly and political beliefs are no longer safeguarded by the city’s legal system. Torture and imprisonment inflicted on human rights defenders in China may occur in Hong Kong, with activists like Joshua Wong and myself likely targets of the authorities,” he warned.

The 2.5-inch SATA solid-state drive aims for a speeder ride than its predecessor and offers storage options from 250GB to