India on Monday will launch high-capacity coronavirus testing facilities in three major cities able to test over 10,000 samples a day.

The opening event with Prime Minister Narendra Modi will be organized via video link at the Indian Centre of Medical Research (ICMR).

The testing facilities have been “set up strategically” at ICMR facilities in Noida, Mumbai, and Kolkata,” said a government statement.

British people should eat less to lose weight as being obese increases the risk of dying from the novel coronavirus, junior health minister Helen Whately has said.

Whately said that those with a body mass index of over 40 had double the risk of dying from COVID-19.

Clinical diagnostics company Novacyt  – one of many healthcare companies whose shares have surged during the pandemic – has announced more new products to test for the presence of the coronavirus.

Novacyt said it was developing a respiratory testing panel to diagnose and distinguish between the ‘A’ and ‘B’ types of influenza, the respiratory syncytial virus (RSV) and COVID-19, with the launch of this product expected in September in time for the 2020/21 flu season in the northern hemisphere.

“The immediate pipeline of new products is expected to drive incremental revenue for the company in the near-term, but Novacyt’s strengthened financial position also means we are able to redefine our R&D pipeline for the next three years, which we expect to drive significant and continued growth opportunities in the longer-term,” said Novacyt CEO Graham Mullis.

Dublin-based Ryanair suffered a loss after taxation of 185 million euros ($216 million) in the three months to the end of June, or first quarter of its financial year, compared with net profit of 243 million euros in the same part of 2019, it said in a statement.

Passenger numbers fell by 99 percent to just 0.5 million people compared with 42 million a year earlier, while more than 99 percent of the airline’s fleet remained on the tarmac.

“The past quarter was the most challenging in Ryanair’s 35-year history. COVID-19 grounded the group’s fleet for almost four months, from mid-March to end June, as EU governments imposed flight or travel bans and widespread population lockdowns,” the carrier said in a statement. 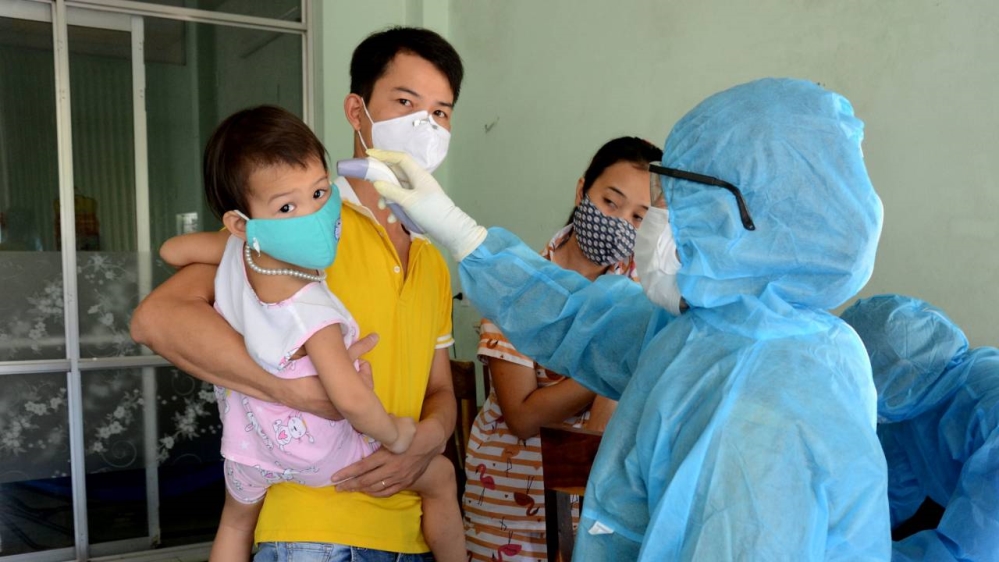 Vietnam has ordered the evacuation on Monday of at least 80,000 tourists from the central city of Da Nang following the re-emergence of the coronavirus.

The government said on Monday it needs four days to implement the evacuation in Da Nang after three residents of the city tested positive of the coronavirus.

According to a government news portal, as of Monday morning, Vietnam recorded 420 total cases of coronavirus, of which 365 have already recovered. The country has reported no deaths from the pandemic.

President Donald Trump will not be throwing out the first pitch at Yankee Stadium next month, according to the AP news agency.

Trump tweeted that he would not be able to make the trip because of his “strong focus” on the coronavirus, vaccines and the economy. Trump said in the tweet: “We will make it later in the season!”

He had announced at a briefing on Thursday on Major League Baseball’s opening day that he would be at Yankee Stadium on August 15 to throw out the first pitch.

Trump has been trying to show voters that he is taking the virus seriously by holding briefings and cancelling Republican convention events set for Jacksonville, Florida. Florida is among several states where the virus is raging.

The number of confirmed coronavirus cases in Germany increased by 340 to 205,609, Reuters news agency reported on Monday quoting data from the Robert Koch Institute (RKI) for infectious diseases.

The reported deaths remained unchanged at 9,118, the tally showed.

Vietnam has postponed its hosting of Asia’s largest security forum, which includes North Korea, and an annual meeting of Southeast Asian foreign ministers by a month to September due to the coronavirus pandemic.

Two Southeast Asian diplomats said on Monday Vietnam, which leads the Association of Southeast Asian Nations this year, hopes to hold face to face meetings in mid-September instead of doing them online due to travel restrictions if the annual gatherings were to be held as originally scheduled later this week.

The 10-nation bloc hosts the ASEAN Regional Forum, which brings together its top diplomats with counterparts from the United States, China, Japan, Russia, India, the two Koreas and other Asia Pacific countries to discuss the denuclearisation of the Korean Peninsula and other security issues.

Most of about 1,300 ASEAN meetings this year have so far been shifted online due to the pandemic, including an annual summit last month.

China on Monday reported 61 new confirmed cases of coronavirus, spread between its northeastern and northwestern regions.

The Xinjiang region in the northwest reported 41 new cases, while Liaoning and Jilin provinces in the northeast saw a combined total of 16.

Another four cases were brought by Chinese travellers from abroad.

South Korea’s new coronavirus cases have fallen back to below 30 as imported cases dwindled from a record high over the weekend, according to Yonhap news agency.

The country added 25 new cases, including 16 cases from abroad, bringing the total to 14,175, Yonhap quoted the Korea Centers for Disease Control and Prevention (KCDC) as saying.

The tally marked a sharp fall from 58 new cases reported on Sunday and a four-month high of 113 on Saturday.

The country also reported one death, raising the death toll to 299, according to the KCDC. The death rate reached 2.11 percent. 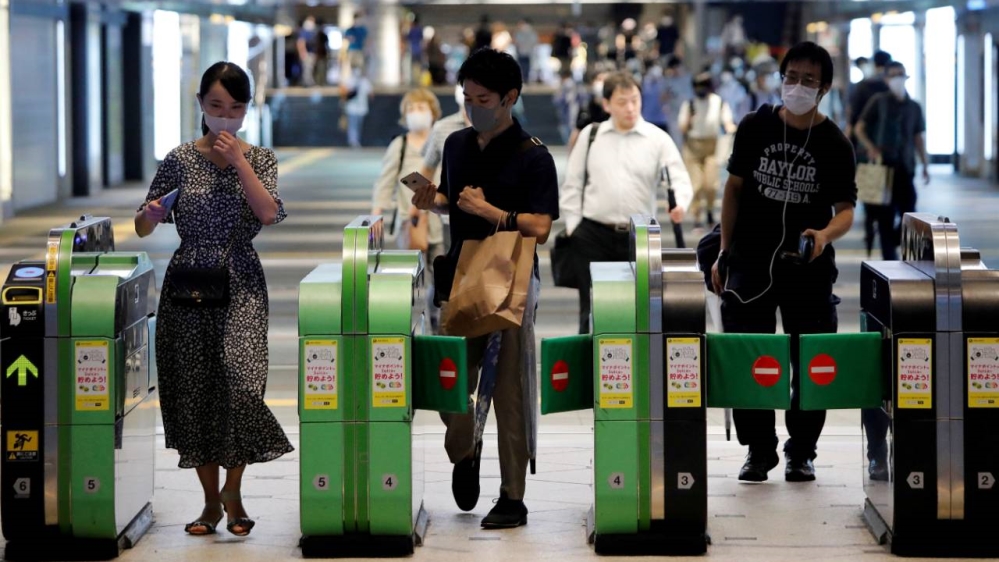 Japan’s economy minister says the government will urge businesses to aim for 70 percent telecommuting and enhance other social distancing measures amid a rise in coronavirus cases among workers, some infected during after-work socialising, Reuters reported.

Though Japan has largely avoided the mass infections that have killed tens of thousands overseas, a record surge in cases during the past week in Tokyo and other important urban areas has experts worried the country faces a second wave.

Economy Minister Yasutoshi Nishimura late on Sunday called on business leaders to enhance anti-virus measures such as encouraging the level of telecommuting achieved during Japan’s state of emergency this year.

Tokyo last week reported a daily record of 366 cases, including 239 on Sunday. The southern city of Fukuoka reported a record 90 cases on Sunday, along with rising numbers in Osaka.

A popular resort town in Austria has ordered restaurants and clubs to close early and urged people to avoid going out as it grapples with a new outbreak of the coronavirus.

The DPA news agency reported that hundreds of people have already been tested in the town of St Wolfgang, east of Salzburg, after the outbreak was first detected on Friday. At least 44 of those have tested positive, the Kurier newspaper reported.

They were thought to have become infected while partying in the town’s bars, two of which have now been temporarily closed to prevent further spread.

Australia’s second-most populous state of Victoria reported on Monday six deaths from the coronavirus and logged a record daily increase of 532 new cases compared with 459 a day earlier, according to Reuters.

“Five of those six deaths are connected to outbreaks in aged care,” state Premier Daniel Andrews said in a media briefing in Melbourne.

Victoria on Sunday suffered its deadliest day since the pandemic began after reporting 10 deaths, mostly at aged-care facilities. 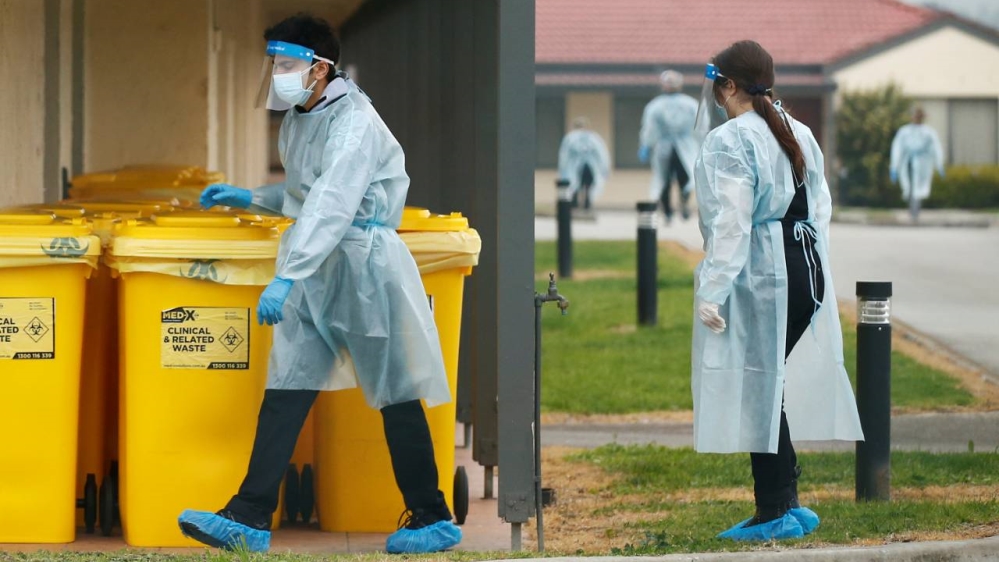 Serbia has reported a record number of daily cases of the coronavirus, according to the AP news agency.

Health authorities said 467 people have tested positive for the virus in the past 24 hours, the highest since the start of the outbreak. They said eight people have died.

Epidemiologist Darija Kisic Tepavcevic, however, said there is reason to be optimistic because there have been fewer people in need of hospitalisation.

Serbia has confirmed 23,730 cases of the virus while 534 people have died of COVID-19 in the country of some seven million people.

Mexico’s Health Ministry has reported 5,480 new confirmed cases of coronavirus infection and 306 deaths, bringing the total in the country to 390,516 cases and 43,680 deaths.

The government has said the real number of infected people is likely significantly higher than the confirmed cases, according to Reuters.

Spain says it is negotiating with the United Kingdom to exclude the Balearic Islands and the Canary Islands from a 14-day quarantine imposed on travellers returning to the UK from Spain, AP reported.

Foreign Minister Arancha Gonzalez Laya said, hours after the British measure took effect, that “our efforts at the moment are focused on ensuring that the British authorities can exclude the Balearic Islands and the Canary Islands from their quarantine measures.”

The emergence of clusters of the coronavirus has worried authorities in northeast Catalonia and Aragon but has not appeared in Spain’s two archipelagos, which are highly popular tourist destinations for British and other European visitors.

Gonzalez Laya says that the islands are “highly controlled territories” and that their current epidemiological situation is not worse than that of the UK.

Brazil has registered 555 deaths attributable to the novel coronavirus over the last 24 hours and another 24,578 confirmed cases, Reuters reported, quoting the country’s health ministry.

You can find all the key developments from yesterday, July 26, here.

Courtesy of Rebag / PAUL DE LUNA Since Rebag’s founding in 2014, the reseller site has built a small empire

Microcap Millionaire Review – Should You Trust It?

Milk Paint – A Traditional Finish For a Contemporary Look